I have always dreamed of being a published writer, but I never imagined I would write and illustrate a children’s book. But in March of 2017, I had completed my book, and the next step was publishing. When Your Hands Can Change The World! was completed, I felt many emotions. I was excited, and I felt proud of my accomplishment. But I also felt unsure about what step to take next. Did I want to submit it to publishers and hold out for a traditional publishing contract? Was self-publishing the better option? Ultimately, I decided to go with a self-publishing package through Balboa Press. I considered many options and weighed different factors before making this decision, and you can read more about my process in next week’s post.

Once I committed to working with Balboa Press, the next step in my process was to pay for the publishing package. This is where all of my insecurities and personal challenges really became clear. I knew that I would need at least part of the cost to come from crowdfunding. And asking for money from friends and family meant I had to overcome a lot of negative self talk. I worried about what people would think. Will I be judged for not having the seed money for my project and no traditional business plan? What if someone donates to my campaign and doesn’t like the book? What if I spend donated money on an expensive publishing package and the book doesn’t sell? What if no one donates? What if everyone donates? What if a book similar to this one is published first and becomes a bestseller? I had a lot of doubts about myself.

Upon reflection I could see that I was so excited to have written the book, but I didn’t want to be disappointed by lackluster sales or anything I would view as a failure. The financial investment was a trigger for that fear, but when I looked more closely at what I was really afraid of, it was a broader fear of rejection. And also a fear of success. I realized I was asking the universe for something I hadn’t really opened up to receiving.

I think this is a process as old as time, but this is my truth and the purpose for sharing my experiences here. To combat my fears and try to move forward with the book, I had to do an internal workshop and ask difficult questions of myself. I meditated a lot and I tried to stay open from the messages in my environment. I spoke with a few people I trust. My Dad helped me eliminate my fears of lackluster sales. Two dear friends reminded me that even if I don’t sell 1 copy of my book, I’ll still be able to look back on my life and say I DID IT. Thanks to spiritual tools and good people who support me, I became more confident and was excited to move forward.

With my head in a better place, I created a crowdfunding campaign on Go Fund Me, and in a short time I had enough money to begin the process. My book was completed in July 2017, and I’m having a great time sharing it with people. I learned a lot during the publishing process, but my internal battle was the most difficult part.

Overcoming my fears to invest in my book, to ask for help in completing my book – really putting myself out there despite no guarantees – became one of my biggest takeaways from the entire process. Asking for help in a very public way required that I drop my barriers and really accept help unconditionally. I was met with a ton of encouragement and a network of support much more extensive than I had realized. I was given a foundation upon which to fearlessly commit to the actualization of my dream. 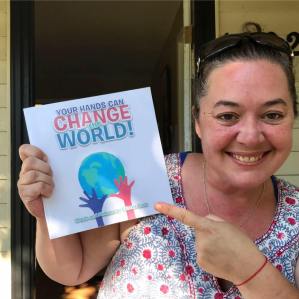 If you’re thinking about embarking on a dream project, I recommend a crowdfunded approach. It’s inspirational, the process holds you accountable, and it requires trust and transparency. For me, it was a recipe for growth and expansion, and I’m so glad I tried it. I’m not sure which direction I’ll go for the second book in the series, but I look forward to the experience.

This site uses Akismet to reduce spam. Learn how your comment data is processed.

My name is Cristee Cook. Author and Illustrator of the bestselling children's book "Your Hands Can Change The World!" I'm a parenting blogger, and poet & storyteller. I help parents live their best life with presence and consciousness.