“I’ll trade you my Barbie for 2 of your My Little Ponies.”

“Ok, but you can’t have Twilight Pegasus.”

“Well you can’t have Barbie and The Rockers, just one of the regular ones.”

My sister and I championed this phrase. It was our secret handshake.

Then, when we were older:

“I won’t tell Mom you set the trash can on fire if you let me borrow your car. And no takebacks.”

My sister is 19 months younger than me, so if I accepted this offer I’d be breaking the law. She knew this. She was playing dirty with this negotiation.

In my defense, I hadn’t set the trash can ablaze on purpose. After school one afternoon I was in my parent’s office, talking on the phone. I’m not a person who just sits and talks on the phone. I fill the space with a mindless action: doodling, shuffling a deck of cards, typing random sequences on a word document, and then when I got older, smoking cigarettes. This time, I was lighting matches. I’d strike the match, watch it burn down until the flame almost met with my fingers, and then I’d shake it out until the ember became a black trail of sulfur smoke. I guess I didn’t let one of the matches burn out long enough because my one-sided chatter halted when I smelled the rancid odor of burning paper. I hastily mumbled “I’ve gotta go!” to my boyfriend, and barely got the phone back on the hook when the smoke detector started screaming.

“I accidentally set the trash can on fire!”

We were latchkey kids. A common part of being a kid in the 1980’s. Our bus stopped in front of our house at around 4 p.m. and my mom didn’t get home until almost 6 pm, so our late afternoons were filled with free-form adventure, mostly in the form of television, unsupervised snacking, and long phone calls with boys, which our mother hated.

Instinctively, I ran to my parent’s room and grabbed the jug of distilled water that was always on the iron board. I doused the flames.

The fire alarm screamed, and my sister was panicking. It was a brutal and invasive irritation, and I think we both feared that somehow there would be some sort of record that it had been set off. That our dad would come home early from one of his week-long business trips and know it had happened. We had no idea how to stop a smoke alarm from alarming, so we did what I must’ve seen on television: we hit it with the end of a broom handle. The scenario is always the same in these fictions: the broom handle hits the alarm case, the alarm case breaks, the batteries fall out, and the noise stops.

I frantically jabbed at the white plastic disc, which was attached to the ceiling. It was harder than the movies made it look. I could hardly reach it even with an extension. I failed to stop the screeching and instead punched broom-handle sized holes in the ceiling all around the smoke detector. I can’t remember how we got the damn thing to stop wailing, but it eventually quieted. We waited for the phone to ring, for the fire department to show up, for Dad to pull into the driveway, but instead it was just silence, my sister and I, the smell of burnt paper, and pure adrenaline.

I told her, “I need to clean up the trash can.”

I returned to the scene only to see that all the water I’d used to extinguish the flames had leaked out the bottom of the rickety, old school metal bin. Dark, sooty stains puddled out onto my mom’s newly installed, light gray carpet. And the clock was ticking. She was due home in less than an hour.

We devised a plan in which I held the trash can over a bucket while we carefully lifted our contraption and moved it down the hall, down the stairs, wincing at every slosh, until we got it out the back door and dumped the soot in the mulched garden bed. I used the water hose to rinse out the remaining evidence from the bin, and my sister dried it. Then it was back upstairs to the office, where we used old cleaning towels and Formula 409 to frantically scrub the soot out of the carpet. Next, I furiously vacuumed the spots to dry the carpet, begging it would be sufficient to go unnoticed.

“What about the holes in the ceiling?!” my sister cried. Her anxiety in the moment only proves our eternal bond, despite our ongoing sibling rivalry. She had not caused any of this carnage. If our efforts to cover up my dumbass actions were unsuccessful, she wouldn’t have been the one in trouble. 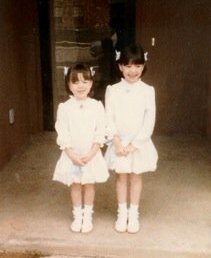 So, it was back down the stairs, out into the garage, where we madly searched for the miracle paste. Back upstairs, my sister held the small step ladder while I clumsily globbed into and over the holes, praying no one would notice. My broom handle attack had also cracked the face of the smoke detector, so I spackled that too. When I noticed the shade of white in the spackle was different than the detector’s hue, I used my craft paints to try and blend the color.

Finished, sweaty, and out of breath, we stood in a weird, silent expectation just long enough to realize it still smelled like smoke and burnt paper, so we turned the ceiling fan on and opened all the office windows.

We put away our crude instruments. We waited.

My mom got home at her normal time. She was happy to see us. We talked about school, and ate dinner, and watched our evening programs, and told our dad goodnight from whatever city he had traveled to that week and got ready for bed. Throughout the evening, my sister and I shared furtive looks, expecting that any second Mom would ask us why the carpet was wet, or why the windows were open upstairs, or why all the distilled water was gone, or why we were being so nice to each other…but she didn’t. It was a wildly uneventful, normal suburban evening in middle America.

So, years later when my sister brought up the small fire as a bargaining chip to take my new car, and my brand spanking new driver’s license, I agreed. Not because I was thought I’d be punished or because I believed she’d actually tell on me. I agreed because despite our complicated sisterhood, and our startling differences, she’s always been my partner in crime. This pattern of negotiation created a stable bridge for us to be united. She’s the only person in the world who really gets my wacko genius, and she’s the first to step up and protect it. Every time. Unconditionally. When we’re united, we’re unstoppable. My trouble is her trouble. Her pain is my pain. Forever and ever. No takebacks.

One thought on “No Takebacks”

This site uses Akismet to reduce spam. Learn how your comment data is processed.

My name is Cristee Cook. Author and Illustrator of the bestselling children's book "Your Hands Can Change The World!" I'm a parenting blogger, and poet & storyteller. I help parents live their best life with presence and consciousness.